The curtains slowly revealed a table, where six puppets were lying. The audience could not see them well. But suddenly the puppets came to life. They stood, bowed finely, and waved hands, presumably saying ‘hello’. The green puppet turned around and faced the blue one:

„Hello Blue, how are you today“

„Yes, he’s over there, discussing something with Grey and Yellow.“
„And Purple?“
„Right behind the corner, buying something.“
…

„Did they like it?“ Blue asked.
„You know they didn’t,“ Grey replied spitefully, „it’s too trivial.“
„But they seemed amused.“ Blue insisted.
„Yeah, that one time when you fell off the table. We need to change it, to make it more …“
„Get real,“ Green interfered, „we can’t change anything in this show. You see these strings?“
„But I like the way we’re doing it,“ Yellow added, „I am fulfilled with my acting.“
„So am I.“ Purple confirmed.
„Why are we even discussing this?“ Red wondered aloud.

A man got on the gloomy stage and headed for the table, where the puppets were lying.
„OK, Boss is coming. See you tomorrow“ Red said, as the man approached. He picked the puppets and walked them each into a separate box.

Grey’s box was small. He was used to it, but it bothered him sometimes. The strings starting from his hands and feet, and ending somewhere outside the box were wrapped around him and it was very uncomfortable. He was just an ordinary puppet on strings, every day performing in front of people whose faces he couldn’t even see in the dark. It was a boring performance, which hasn’t changed for such a long time. Grey knew how to change it. He had ideas and the passion to bring life into the show, but he didn’t have the freedom to do so – the puppeteer, whom they called „the Boss“, has never asked his puppets what to do – he just moved them around the table, waving their hands and making them fall off the table from time to time. With thoughts of jumping around freely, he fell asleep.
The next day was the same. And the day after it. Grey was becoming more and more keen on the idea of changing something, of freeing himself. He didn’t want to be under control anymore. He wanted his own free will to drive his hands and feet. Then he saw them – the scissors – the Boss has left them on the table after giving Blue a haircut. It was Grey’s chance to cut the strings. But time would be needed.
The scissors remained at the corner of the table. „The Boss had obviously forgotten them.“, Grey thought, „I doubt he would introduce even this small change to the show“. But the scissors were away from the Grey, and he couldn’t reach them. One evening, lying on the table, he shared his idea with the others.
„What if we could get that scissors and cut the strings“
„We can’t. He wraps the strings around us as soon as we finish the show, and then even puts us in boxes. No way.“ Green explained.
„What about during the show, it’s …“
„We won’t help you!“ Red halted him.
„Why not? I will.“ Blue said.
„Hey,“ Yellow finally entered the conversation, „are you sure that the boss actually controls us? I mean, we are playing our roles, then he wraps us to save our potential, and unwraps us for the next show. I don’t really mind this.“
„Don’t you understand, you are not performing the way you want. You are performing the way the Boss tells us. You see these strings?“
„These strings are there so that the boss helps us back on the table when some of us falls. For myself I can be certain – he is not controlling my moves!“ Purple suggested.
„Moron!“ Grey shouted. And it was box-time.

After that Grey and Blue started planning it. Blue would try to take as much of Boss’s attention as he could, moving his hands and feet in all directions, and Grey would try to sneak towards the scissors, grab them and cut the strings.
The first attempt failed. Blue couldn’t make it hard enough for the Boss to control him, and the few steps Grey could make were abolished by a single twist of the puppeteer’s hand. Then Red and Green agreed to help Blue distract the Boss. Grey was slowly approaching the scissors. From time to time the Boss retracted him to the center of the table, but he pushed forward. And forward. The others were trying to move their limbs randomly, so the Boss seemed to use a lot of effort to control them. The scissors were already in Grey’s grasp. In a split second he grabbed the scissors, lifted it and with a mighty cut shattered his chains. The puppeteer’s grin flashed in the distance. The strings were cut. The strings were cut. Grey tried to stand up and jump…but he couldn’t. He couldn’t move. The puppeteer’s grin flashed once more. The puppet couldn’t move. 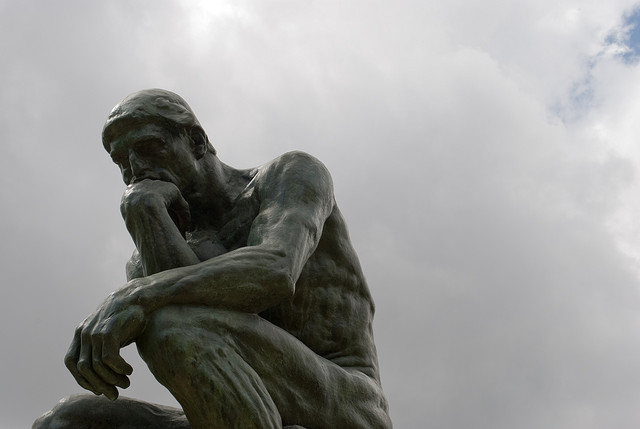